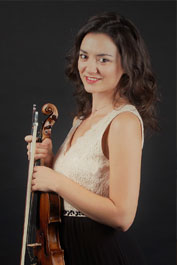 Kalina Miteva was born in 1990 in Sofia, Bulgaria. She started playing the violin at the age of six. In 2009 she finished ”Lyubomir Pipkov” National Music School in Sofia under the tutelage of Prof. Elisaveta Kazakova. Between 1998 and 2002 she took violin lessons with Prof. Muhammedjan Turdiev from Bilkent University in Ankara, Turkey. In 2009 she enrolled at ”Pancho Vladiguerov” National Music Academy, where she has been working under the guidance of Prof. Elisaveta Kazakova. Kalina is currently finishing her Doctor of musical arts degree at the National Music Academy in Sofia.
She has attended master classes of violinists such as Gil Shaham, Mincho Minchev, Angel Stankov, Vilmos Szabadi, Gordan Nikolitc, Beverly Lunt and others. Since 2010 Kalina is the violinist of Chamber Ensemble ”Silhouettes”, which is part of the European Chamber Music Academy (ECMA). Together with her colleagues, Kalina has performed many successful concerts in Germany, France, Italy, Denmark, and Norway and has made recordings for the Bulgarian National Radio. As part of the ECMA Academy, the ensemble has attended many master classes with professors Hatto Beyerle (Alban Berg Quartett), Johannes Meissl (Artis Quartett), Patrick Jüdt and others.