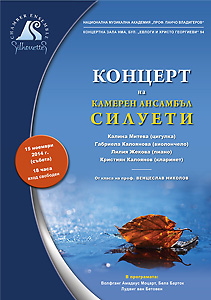 Concert in the Grand Hall of the National Academy of Music

On November 15, 2014 at 6 p.m. in the Grand Hall of the National Academy of Music "Prof. Pancho Vladigerov", Sofia the musicians from Chamber Ensemble "Silhouettes" presented to the audience their new program of works by Mozart, Bartok and Beethoven.

Two concerts marked the end of the musical season 2013/2014 for Chamber Ensemble "Silhouettes". At both events the musicians played together with Prof. Ventseslav Nikolov. The first concert took place in Rousse at "Europe" Hall of Profitable House and was dedicated to the 90th anniversary from the birth of the great Bulgarian composer Konstantin Iliev. His Trio for violin, cello and piano was the emphasis of the program. The new work of Acad. Vasil Kazandjiev "Revelations" for cello and piano (2014), poems by Bistra Nikolova, was presented and performed by Ventseslas Nikolov (cello) and Lilia Jekova(piano).

Here is a part of article in the festival diary written by Mrs. Evelina Zdravkova:

"...The young musicians demonstrated outstanding liability, and in the same time a remarkable freedom to interpret. They did it with a smile, and the audience held the breath from their exquisite style. The Plovdiv's audience dot them out four times for an encore - absolutely deserved. When 20 minutes applause subsided, the vibrations of music continued to feel created genuinely, exciting and professionally by maestro Ventseslas Nikolov and his young virtuosos."

Chamber Ensemble "Silhouettes" played for the audience of the wonderful island of Sylt, Germany for the second year in a row. The concert was held in the hall of the "Akademie am Meer", Klappholttal, where the musicians played together with prof. Ventseslav Nikolov. They performed a varied program of works arranged specifically for violin, two cellos, clarinet and piano. During their trip to the island of Sylt a new friendship was born after an interesting meeting in Berlin with the Bulgarian D.D., which gave rise to the creation of excited and insightful story: 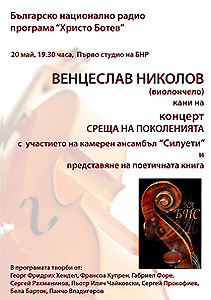 On May 20, 2014 (Tuesday) at 19.30 o'clock in Studio 1 of the Bulgarian National Radio prof. Ventseslav Nikolov (cello) together with the musicians from Chamber Ensemble "Silhouettes" gave a concert entitled "Meeting of Generations". During the concert Venceslas Nikolov presented his new book of poetry "Encore". The concert was broadcast directly at "Hristo Botev" Programme of the Bulgarian National Radio. 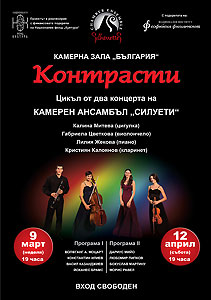 Chamber ensemble "Silhouettes" presented a cycle of two concerts with works from the classical chamber music repertoire, united under the title "Contrasts".

The essential idea in the programs are the contrasts - between music works of various styles, between classics and modernity, between Bulgarian and European music. The aim of Ensemble "Silhouettes" is also to emphasize the worthy place of the Bulgarian composers in the European musical culture. The selection of the pieces from German, French and Bulgarian classical music of the ХХ century aims to show the interrelationship and the influence between them. A highlight in the program of the first concert is the Trio for violin, violoncello and piano from Konstantin Iliev, which was performed for the first time in Chamber hall "Bulgaria" on 15th March, 1978. The musicians of Ensemble "Silhouettes" dedicate the first of the two concerts to the 90th anniversary of the birth of the great Bulgarian composer and long-standing conductor of Sofia Philharmonic. The Trio for violin, violoncello and piano from Lubomir Pipkov is included in the second concert program. Not only this is a piece with a great musical value, but it has its historical meaning as the first Bulgarian trio.

The concerts from cycle "Contrasts" took place on 9 March and 12 April 2014 in Chamber Hall „Bulgaria” with the financial support of National fund "Culture" and National Institute "Sofia Philharmony". 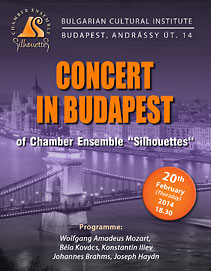 The concert took place in the hall of the Bulgarian Cultural Institute in Budapest at 18.30 o'clock. 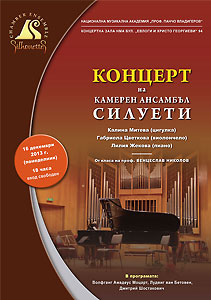 Concert in the Grand Hall of the National Academy of Music

On February 20, 2013 in the Grand Hall
of the National Academy of Music "Prof. Pancho Vladigerov", Sofia
a concert of Chamber Ensemble Silhouettes has been held.

On the 16th and 17th of October 2013 at the invitation of the Bulgarian National Radio the musicians of Chamber Ensemble "Silhouettes" recorded in Studio 1 two works from the classical repertoire of the XX century – Paul Hindemith Quartet for clarinet, violin, cello and piano and Prelude and Fugue in D dur for piano by Dmitri Shostakovich, arranged for clarinet, violin and cello by Kristiyan Kaloyanov.

We are very grateful to BNR for the opportunity and for the wonderful work of the whole team during the recordings!

Chamber Ensemble "Silhouettes" thanks the German Embassy in Sofia, Foundation "Jordan Kamdzhalov"
and all friends and fans for their financial and moral support during the summer of 2013.
Without this we couldn't participate in the International Summer Academy ISA13 in Semmering, Austria, where we have been chosen for a scholarship.

Warm thanks for your support! 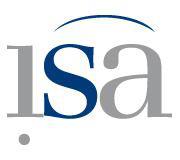 Special Award ("Förderpreis") of ISA13 was given to Chamber Ensemble "Silhouettes"!

Concert of Chamber Ensemble "Silhouettes"
at the Balabanov House in Plovdiv

On September 12, 2013 in the comfortable atmosphere of the Balabanov House in Plovdiv the musicians from Chamber Ensemble "Silhouettes" presented an interesting musical program. Works by Bohuslav Martinu, Joseph Haydn, Johannes Brahms, Alexander von Zemlinsky were performed. The concert was attended from the world-famous American surgeon Dr. Ben Carson and his wife Candy. Prof. Ventseslav Nikolov, with whom the musicians worked at the National Music Academy "Prof. Pancho Vladigerov", was also among the audience.

On September 27, 2013 in Musical Center "Boris Hristov" in Sofia the musicians of Chamber Ensemble "Silhouettes" played for the participants in the XV National Congress of the Bulgarian Association of Radiology, 2013. The aim of the organizers was to present to the Bulgarian and foreign guests young and talented Bulgarian musicians. The program included works by Ludwig van Beethoven, Dmitri Shostakovich, Bohuslav Martinu,
G. Fr. Handel-Halvorsen, Joseph Haydn and Vassil Kazandjiev.