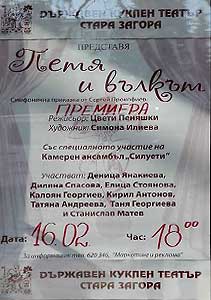 The symphonic tale "Peter and the Wolf" by Sergei Prokofiev narrated by means of puppet theater of shadows. Audio-visual performance in which the narrator and the whole team turned the music into images. Create vivid pictures, acting characters and real situations, unifying story that reveals friendship, courage and growth. By means of the theater of shadows music turns into pictures, and they - in history.
See the music of Sergei Prokofiev!